Part 19 Cooler weather. The dark period. Somehow, this year it seemed more dark than ever. Chillier. The leaves crunching under my feet seemed so loud. Summer had ended. I walked up to the front door of Coach Mike’s house just as the sun was setting. A perfect and inviting wreath hung on the door, and the yard was manicured, It was everything a girl like me imagined. A stray ball and glove were in the front yard, abandoned. As I approached the front door, I saw what was left of my original family sitting at the dinner table eating mini corn-dogs, macaroni and cheese. I thought of Mama. In the center of the table was a huge fresh bright pineapple. I smiled. There was laughter, and lots of chatting. Happy. There was happy. The kind of happy you get when you win a championship game. For an extra few moments I just stood there and listened. It was confirmation that I had done the right thing. It was a Godwink, telling me I was headed in the right direction…now I just had to tell my siblings.

Jenna and I had graduated high school. Summer ball was over. School had just started back, Jenna was off at college, and I was suddenly thrust into the part of becoming an adult that no one ever really prepares you for. They think they do. Teachers and coaches and parents. They all try. But the truth is that the future is not much different than being up to bat and waiting for the perfect pitch to hit. You can decide to hit the fast ball, but it may not be a strike. You can tell yourself to hold back on the change up, and then be as surprised as anyone when you hit a dinker that dribbles into the infield, with your coach throwing his hands up on the sidelines because you made the third out off the inning. It’s the whats next. The planning and plotting. And truth is, we never really know whats next or what’s gonna happen. You could hit a grand-slam, or fall down swinging out of your shoes – no matter how trained you are, no matter how much you have practiced, no matter how much thought you have given to the future..it often comes down to the luck of the pitch. And if you have read my story this far, you know that I stopped making plans long ago. That I am more of a pinch hitter.

Because, for years and years I had imagined that my future was decided, made up of welfare groceries, a part time job or two slinging burgers and trying to do the best for my siblings to give them better than what I had. Coach Mike had showed me what that better looked like. While my peers were planning for college, dating, partying, finding jobs and trying to find their place in life – I have just been trying to survive.

But there was Kennedy Boyd. The last year of high school I had many conversations with Kennedy Boyd. But it was not until Coach Mike and his wife took my siblings in after mama died, that I really wanted to listen to what Mr. Boyd had to say. And that is what I did today.

Mr. Boyd took in the un-coachable…the students without a team. Kennedy Boyd took a dim or bleak future, and changed it. He gave it possibility. After our 4 hour meeting today, Kennedy Boyd gave me a future and because of softball, and the people of softball, and the friends softball gave me, and the opportunities softball opened up…I was not just able…but happy, and proud to and excited for my future. For Millie’s future….

It had been 10 weeks since I left. Basic training was tough. I was not allowed to have any contact with my family, which was by far the hardest part. Had my brother and sisters been with Mama, I would have not made it. But I knew they were in good hands, and I knew that they were happy and being taken care of. I had been through darker seasons, there were many autumns from my past that were much harder. One of the things that had always got me through in life was a team, even if I felt like an outsider, having a team was something I could do. And thats what drew me in to the Army.

I had 3 days home before my Advanced Individual Training was to begin. My MOS was going to be army medical, a dream I always had, but never dared to dream…. I didn’t tell anyone I was coming, and when the cab dropped me off I saw that Coach Mike’s wife had a new wreath on her front door. It had a baseball and a softball and said “If we don’t answer we are at the ballfield!” I smiled. My hand drifted up to the doorbell, and then it dawned on me that I was family. The handle turned and I walked inside.

The living room TV was turned way up, and some holiday cartoon was playing. The house smelled like apples. I heard my sisters and my brother squabbling. Coach Mike had heard the door and stepped into the foyer. For what seemed like forever, he stared. Then his wife came around the corner. And she stared. “You always did wear a uniform well,” Coach Mike finally said, breaking the silence and they both rushed to hug me. My brother and sisters came running “MILLIE, you’re home, you’re home!”

Uniforms. You can take 13 girls who may not know each other, may have never met, or may not like each other and put them in the same uniform and suddenly they are a team. Suddenly, somehow…they are after the same thing. And suddenly, because of that uniform – they little by little start to see one another differently. They learn to trust. They learn to pick one another up. They learn to be there. Maybe they still don’t like each other, maybe they still have some personal issues, but it’s game time, and the only way to win when you are wearing the same uniform is to work together. The gifts that come with wearing that uniform develop over time, require hard work. That uniform becomes respected and suddenly bound together are 13 girls with the same vision. People who wear that uniform become family. They share their pineapple with you. They give you a place to stay, a hand up when you are down. They open up their homes, and most importantly their hearts. All because of a uniform.

If it were not for the comfort of uniforms I wore throughout my childhood, I would not have chosen to wear them as I entered adult-hood. And yet, I cannot imagine a future doing anything else.

The next time you see me, I will be wearing another uniform. That of a registered nurse. All of this, because of softball. 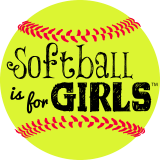 Softball Leggings | Softball Is For Girls